I’m going to say, straight away, that some of these might be repeats on what I’ve previous blogged about HERE, HERE and HERE but, well, it can’t be helped. I’m still watching shows and I’m going to talk about them!

If you follow me on social media or know me in ‘real’ life you might know I stopped watching Dexter midway through season five because I was so angry with the way the show had gone I couldn’t even bring myself to re-start it. So long, did I wait, that I actually thought that it wasn’t as good as I remembered it. I was SO wrong. The other day I decided it was time to re-visit Miami Metro and I’m glad I went back. Season six has brought it back to what I enjoyed about the show in the first place so I’m plodding on, happily, and have no doubt I’ll have finished the entire thing by the end of the year.

Did you watch the revival? I tried to spread it out over as long a period as I could but I didn’t last very long. I watched it over two and a half days, which was pretty decent of me if you ask me! This series is definitely one which has sparked a debate. I’m always on the side of positivity rather than bashing it because it didn’t hold up to what I expected. Mostly because I didn’t expect anything; I didn’t even try to imagine what the creators would do and whilst I was unhappy with the duration of the guest stars I wasn’t disappointed with anything else. The characters are as real to me as the readers of this blog. Can I reference Schrodinger’s cat and not be sneered at? Can I get away with that reference? We’ll move on. I loved it. I liked that I didn’t like the way the character’s had progressed because real people make really dumb life choices, I liked the way Jess’s arms wore that t-shirt.

Once Upon a Time

After an epic binge-watch I finally caught up with the real-time show. I’m now on a week- to-week viewing (which never goes well for me) and… uuurgh… It’s hard to talk about this show because I loved it so much to start with and then it’s slowly gotten worse and worse. I’m so far in, though, that I now have to see it through. I’m praying this season is the very last one and I can put the show to rest.

Why is it so bad, you ask? Mostly because the plots have become laughable and it seems like they’d rather write in fairy tale characters just for the sake of it rather than make them anything like the characters they’re supposed to be. I’m very precious of fairy tales and folk lore so it just irks me.

Yesterday I watched the first 4 episode of season six and I’m desperate for the rest of the season. I hate having to wait for episodes to air but I’ll do it for Teen Wolf. The show has had it’s ups and downs. The last season was a bit blargh for me but this one looks to be great.

I won’t give anything away but it’s kind of what I expected them to do, for some reason. They have brought some characters in, though, which make me excited as they’re something I kind of know about already which is always fun. Basically I just like mythology a lot and when I have pre-existing knowledge it makes me feel smart.

Sadly the newer characters they’re giving screen time aren’t strong enough as stand-alones to make me care what happens to them but the original guys are still knocking around so it’s fine… for now.

New Girl has a contender for hilariously awkward, terribly behaving, adult relationships. It’s a Netflix original and I almost didn’t watch it because it didn’t sell itself very well on Netflix. What it should say is that it’s a show about a crazy woman who turns every situation in her life into a musical number. Every episode has an original song, or two, about the current issue; whether it be getting ready for a date or going to a yoga class. The characters are so dysfunctional it’s acceptable because there’s no ‘normal’ to compare them to and it’s just so easy to watch and get lost in that you actually forget that Becca is actually C.R.A.Z.Y.

I have Amazon TV but I never watch it because I am lazy… and clicking Amazon on my TV seems like a chore. It’s not, I’m just THAT lazy. I’m glad I had a look at the shows available, though, because I just clicked on Lucifer to see what it was like and ended up binge watching season one and now I’m watching it real time and wondering why I do this to myself. It’s about the devil but he’s decided to leave Hell and run a nightclub in LA. He then gets involved in helping the police and hilarity ensues. It sounds silly but it’s rife with Christian mythology and Angelic Lore, which I’m all about, so it satisfies my need for fantasy. Plus Lucifer is a great character and played by someone who has successfully grasped success after Eastenders; a feat almost unheard of. 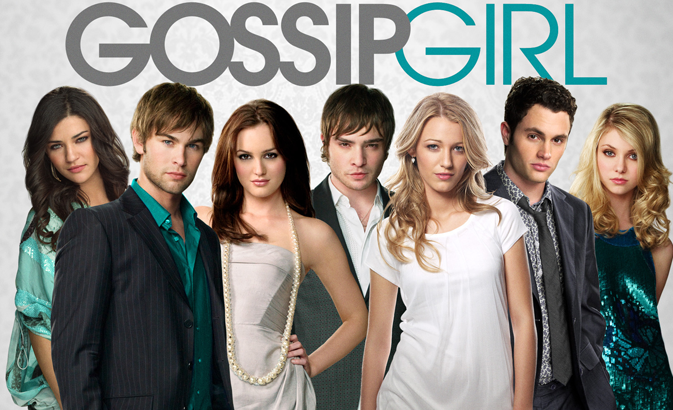 Honourable mention goes to the six seasons I missioned through over a couple of months. I had always assumed GG was awful… and it was but that kind of awful you watch with glee just because it’s so insane. Teenagers with so much money they can do whatever they like and pretty much get away with murder. It was actually so much better than I expected. I’ll probably watch it again just so I can look for clues; the premise of the show being that Gossip Girl is a blog which, like ‘A’ in Pretty Little Liars, knows every single thing everyone does. Through the seasons they flail around wondering who this all-seeing person is but once you find out at the end it begs you to watch it again just to see if they had been working with the idea all along or if they just decided at the end to put a pin in the damn thing. Either way, watchable trash.

I’m hoping to be watching NEW shows at some point soon. If you have suggestions I’m always open to them!