I’m usually juggling a few TV shows at once but at the moment I feel like I’m not watching that many things! To be fair it’s because I’ve been reading more of late but still; I need more TV shows to watch.

In my LAST POST about this I said I was going to finish Dexter. I haven’t. I still think I’ll pick it back up but not right now!

With that in mind my current TV shows are:

Once Upon a Time

I started binge watching season 1 a while ago and I’m most of the way through season 2 but it lost its pizzazz once the inhabitants of Storybrooke could remember who they were and some of them went back to the Enchanted Forest. I’ll go back to it soon but some of the characters started to really irritate me (Mulan; blargh!). I still love it, though, and LOVE Ginnifer Goodwin possibly too much.

I think this is the first time I’ve watched the series the WHOLE way through again. Whenever I rewatch it it’s just because it’s on TV but now I’m hooked again. I just crested the Season 4 wave; Rory is in college, Luke and Lorelai are still teasing me with the romance [will they/won’t they] and it’s permanently Autumn and I’m craving giant jumpers and pumpkin everything.

Don’t Trust the Bitch in Apartment 23 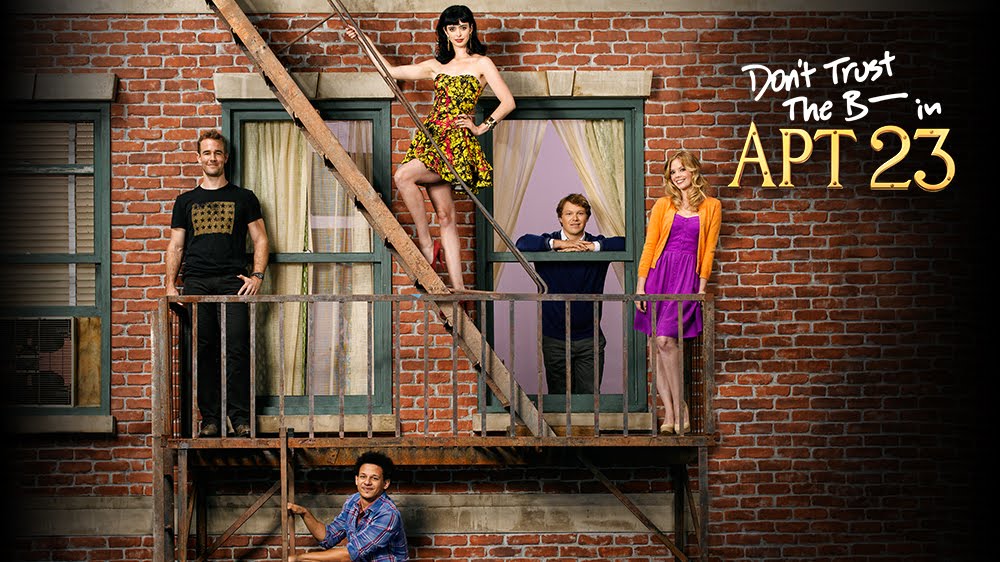 I decided to pop this on this weekend because I’ve seen a couple of out-of-sync episodes and figured I’d best actually watch the whole thing. I’m almost done with both seasons. I went in knowing it was only two seasons but I’m still sad that it’s coming to an end. This, for me, is the sort of sitcom that should have lasted 10 seasons, not crap like How I Met Your Mother and The Big Bang Theory (how is that still going?!!).

Yes! They made a season 2 and… I don’t hate it. At first I was watching it because, despite the whole Dexter thing, I hate not finishing shows. As it’s gone on, though, I really enjoy it. I have no idea what’s going on and have no idea why, despite having gone through it all before, the kids are still apparently unable to tell parents/law enforcement people that they’re being harassed but never mind that. I’m hooked and I like it. But come on; where’s the FBI?!

Yep. This is still going! Season 7 is taking the story to the extreme but I don’t hate it. Again; people who have never learnt to trust anyone like the police of the FBI…The girls are getting harassed again, they still can’t throw a punch between them, but damn it the show is just so good at keeping you mildly interested enough to click ‘watch’ when the new episode comes on Netflix.

I really wanted to get into some anime and saw this had pretty good reviews. Animation-wise it aint the best, however, the story is pretty cool and the girls are hilarious. The best parts, though, are the fighting scenes. If you want a bit of light entertainment which is also pretty jam packed with girls kicking ass this might be for you!

Enjoy; let me know if you watch these or if you have any suggestions. As much as I hated the episode I watched of Gossip Girl I still kinda feel like I should watch it so… maybe I will soon?